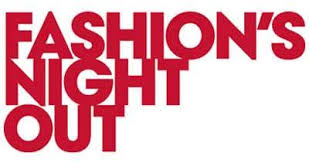 For years I worked a corporate suite at the US Open Tennis event during the semi-finals and finals week in NYC, which if you are not aware is immediately followed by Fashion Week NY. While I never was able to sit front row next to A-Dubs aka Anna Wintour I at least got to explore New York during Fashion's Night Out. For me FNO is basically a free pass to spend a stupid amount of money on things that I am convinced I need because I have consumed a few cocktails. The next morning I usually feel a little guilty, but then purge my closet of a few items that I donate to a good charity and then all is right in the world again. At least that's what I tell myself.


It all started four years ago when V (my FNO partner in crime) and I were walking down 5th avenue and checking out the shops. We knew FNO existed but it was the first year out so we had no idea what to expect. Then there it was, a curious smell of cheap boy toy cologne half a block away, followed by ear splitting music and then finally the half naked Abercrombie & what's it boys in the flesh. This is when we knew that this was more than just a get out and shop event, this was marketing genius. The boys were posing near the front entrance of the door and those who dared to enter could have their photo taken with them. As tempted as I was to have this happen, V convinced me that I couldn't have my first FNO experience be a place that only has clothing sizes for midgets and tweens. So with a wave and a giggle to the boys we continued on down the street ending up at Prada, which in our estimation would be quintessential FNO party. Boy were we wrong. We ended up standing around with a whole bunch of people exactly like us, sipping drinks and pretending that we can afford to even shop there (no amount of alcohol will convince me that the Prada 2009 is worth that amount of money). After we finished our drink it was decided that the best parties would most likely be downtown, as opposed to midtown, but that was going to take too much work (you know, getting a cab and then deciding where to have it take us) so we decided to duck into our favorite restaurant and have some fantastic wine and tapas. Much better than having to pretend to like some ugly shoes just for some free champagne.

The next year we perfected it and so did a lot of the retailers. It was loads more fun and there were way more celeb and celeb wanna be's out and about to keep us entertained. Then the following year my corporate event didn't need us anymore onsite. So last year was my first year not in NYC for FNO. Of course I kicked it up at a party near me in Seattle, because I do still enjoy champagne and a good evening of retail therapy, but it was just not the same.

This year I was a little sad that I wasn't in the US for FNO. I had thought about heading up to LA for a few parties I was invited to, but being in the Netherlands makes the trip to LA a little hard. Then I started noticing online that the FNO has spread to other cities and countries, including Amsterdam (September 13). While it's not quite the same star studded level that NYC & LA seem to put on, it is still quite impressive with fashion shows and sales galore. Which if you think about it is all that matters, unless of course you are into sipping champagne at every store and gawking at Kimye, which is actually what V and I would have been doing if we were in NYC this year.

Last night was FNO NYC and instead of spending it at the local shops I ended up polishing off a bottle of champagne with the BF and the BF's mother while shopping FNI, Fashion's Night In. Which is basically just shopping online, but the perk is that I find it way easier to say no to items online than in person so I had no guilt this morning. Next year who knows where I be. I officially have a year to plan and save.

So did you do anything FNO related or did you stay in and watch the DNC or VMA's?
Posted by Shannon at 3:21 AM