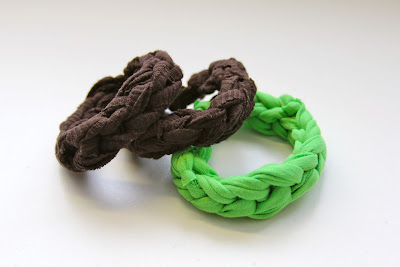 Yesterday was a rain day here in South Holland complete with thunder and a little lightning which I decided to use as an excellent excuse to get a little crafty indoors. Since I am in Europe I don't have all my trusty craft items that I have in the US so I needed to find something simple that didn't require much more than old t-shirts and possibly some glue. After hitting Pinterest for a whole three minutes I found a super easy jersey knit bracelet tutorial here that completely fit my criteria. I had seen a similar bracelet on a style blogger site a while back (unfortunately can't remember where) and had been meaning to try and figure it out, but this tutorial is even better. There are a few changes/adds that I did that differ from the the original post. In the tutorial she uses jersey knit strips from the store I opted to up cycle a cotton jersey tank (the green one) that had a few holes in it and loved the results. The second shirt I used was a ribbed cotton tank (brown one) and while I was piecing the strips together I wondered how it would turn out because it's such a different material. I actually ended up liking it even better than the first one, so much so that I made two of them! The ribbing added a great texture to the bracelet that gives it an earthy, bohemian feel that I am totally digging. I also used less total length of the strips than in the tutorial, but I have freakishly small wrists so maybe that is just me! The other thing I did is that once I finished with the bracelet I noticed there were a few ends sticking out from where the strips were pieced together. To give it a slightly cleaner look I ended up tucking and stitching a few of the strip ends back into the bracelet, but other than that the bracelets came out great. I think this would be an excellent project with kids not only because it's easy, but if you have an old t-shirt hanging around the project costs nothing. Hard to beat that!